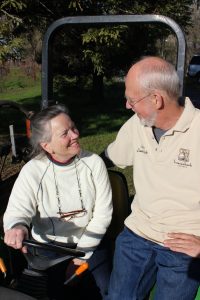 Stew Lauterbach and Barbara Swary came to Sonoma County in 1987 and fell in love with the  Oaks and Grasslands.  They purchased their home in the hills overlooking the Santa Rosa  River Valley plains.  We decided to purchase what is now Lauterbach Vineyards in 1992 starting their story as grape growers and in 2000 opened a garagiste winery.

Stew  grew up in the Chicago area where he developed a love for the outdoors and became an accomplished swimmer.  In college, he pursued aquatic sports and taught canoeing and kayaking, often running trips to Canada. During this time he was also a volunteer firefighter and paramedic, which led him to pursue a medical career as an emergency physician.

Barbara  grew up on a farm in a rural area of northwest Ohio.  She spent many days of her youth driving tractor on her family’s small farm, where the primary crops were winter wheat, oats, alfalfa, soybeans and corn.  At this time the primary careers outside of the home were nursing or teaching – Barb chose nursing and pursued her career in Cincinnati.

It was in Cincinnati that Stew and Barb met as he completed his medical degree at the University of Cincinnati.  This began their now 35+ year relationship that encompassed their love of adventure, travel, medicine, and, eventually, wine. At the completion of Stew’s medical studies in 1981, a computer match sent the young couple to Highland General Hospital in Oakland, California, where he completed his training.

In California, they discovered hiking in the Sierras and the Coastal Range and sailing on San Francisco Bay.  Their love of a little adventure, eventually took them on a sabbatical to explore the inland waters of Alaska by sailboat.  It was during this trip the Lauterbachs had a revelation that led them to Sonoma County and Stew’s position at the local trauma center, Santa Rosa Memorial Hospital.

It was easy to see how the paradise of Sonoma County led them to find a ranch in Russian River Valley, an area famed for grape growing.  It is here starting in 1995 they planted Pinot Noir and Syrah grapes, varietals that flourish in this microclimate.

Barb ultimately wanting a more flexible schedule decided to pursue a law degree and for many years provided legal assistance to seniors of Sonoma County as Director of Legal Services for the Council on Aging Services for Seniors of Sonoma County.  It also allowed much more time for the raising of their son, Nathan.  Now that he is a young adult, Barb has retired from law to help more with the winery administrative aspects.

Nathan is currently attending the local Santa Rosa Junior College.  He is interested in computers especially game programming at this point in his life.

Stew retires from Emergency Medicine August 1 2017 after 33 years at Santa Rosa Memorial Hospital.  He plans to expand his activities in his role of grape grower and winemaker, with increasing focus on marketing  It is with his expertise that Lauterbach Cellars  award  winning wines are produced.  For this adventurous family, winemaking remains a challenge with great rewards that they love to share.